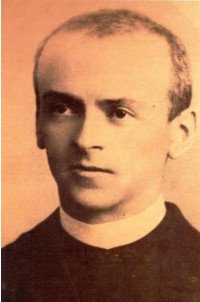 In 1871, he began his novitiate with the order at Courtefontaine, Jura and made his first vows the following year.

In 1873, he became a boarding school supervisor at Saint Claude also in the Jura but was transferred during the same school year to Stanislas College in Paris.

In 1878, he was sent for university studies at the Institution Sainte Marie on Rue du Mirail in Bordeaux where he studied science, literature, and philosophy after which he began teaching high school classes.

Several years later, in 1884, he was moved to teach at a Marianist school at Réalmont in the Tarn region

During this period, he began to take an interest in the sociological works of Frédéric Le Play. Indeed, he launched a “Society of Friends of Le Play.”

In 1887, he founded the first Marianist community in Spain at San Sebastian.

In 1896, he returned to Stanislas College, where Marc Sangnier had launched the Crypt with the encouragement of another Marianist, Fr Leber.

Brother Cousin, who became known as “Père Cousin” to members of the Crypt, assisted them to make contact with patronages (youth clubs) and to organise study circles to discuss economic justice issues and develop social action.

After Fr Leber died in 1902, Br Cousin continued to work with Marc Sangnier and the embryonic Sillon movement.

But in 1903, he moved to Belgium after the Marianists were expelled from France along with other Catholic religious congregations. Nevertheless, he continued to maintain an apartment in Rue de Rennes, Paris, just near Stanislas College.

In 1904, he published his book, “Catéchisme d’Economie sociale et politique.”

Two years later in 1906, he published “Vie et doctrine du Sillon,” which attempted to explain the theological and sociological foundations of the movement.

This was followed in 1909 by “Le Sillon et les catholiques,” a defence of the movement against the mounting attacks to which it had become subject.

In 1906-07, he travelled to Riga and Warsaw, both then in Russia, to investigate the possibility of new Marianist communities.

In 1921, he was sent to Madrid to work at the Colegio de Nuestra Señora del Pilar.

In 1928, he suffered a heart attack and moved to Antony, now a southern suburb of Paris.